What Is Letter In Lacan’s Teaching ? 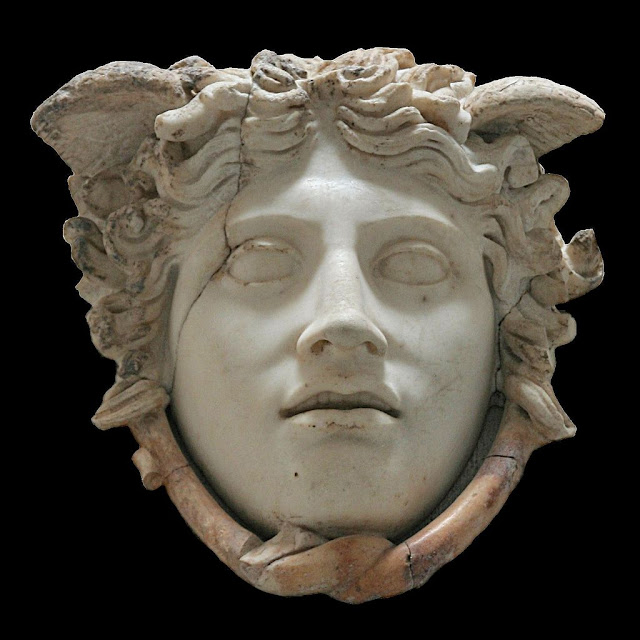 What Is Letter In Lacan’s Teaching ?

What is letter in Lacan’s teaching ? ‒ if you pose the question in that way, you cannot find the answer because he doesn’t use the term “letter” univocally. In general he doesn’t care for univocality and coherence of his terminology because a psychoanalyst supposes always equivocality of what is uttered. On the contrary what is coherent and constant in Lacan’s teaching is the topology implied in Heidegger’s Denken des Seins (thinking of Being) on which Lacan is always based and which I call “apophatic ontology”.

For example the first text of Lacan’s Ecrits “Seminar on The Purloined Letter” as well as that of his Autres écrits “Lituraterre” seem to concern letter. In the former, as I pointed out in my article “The Signifier Phallus in Lacan’s Teaching”, the purloined letter which can be found nowhere and which is “the veritable subject of the conte” is the barred subject $, i.e. Being (Sein), situated in the locality of ex-sistence (Möbius surface, coloured red, in the topology of projective plane, cf. Fig 1). 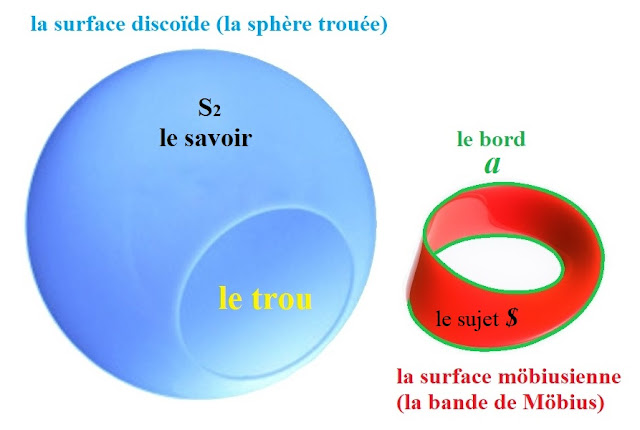 However in the latter Lacan says : “letter is more properly... littoral, isn’t it ? that is, it figures that an entire domain becomes a frontier for another domain in that those two domains are foreign to each other to such a degree as they are not reciprocal. Edge of the hole in the knowledge : that is what a letter draws” (La lettre n’est-elle pas... littoral plus proprement, soit figurant qu’un domaine tout entier fait pour un autre frontière, de ce qu’ils sont étrangers, jusqu’à n’être pas réciproques ? Le bord du trou dans le savoir, voilà-t-il pas ce qu’elle dessine : in Autres écrits, p.14). 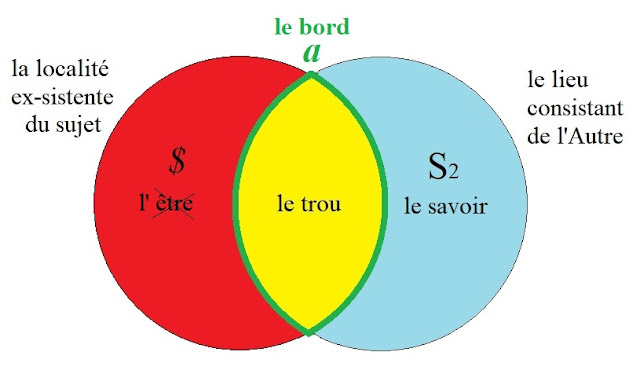 So we draw, as represented in the Fig. 1 and 2, an edge (le bord : green) of a hole (le trou : yellow) on the surface of knowledge (le savoir : blue). Möbius surface (red) represents the ex-sistent locality of Being (être, Sein) where the barred subject $ dwells.

The structure depicted by Lacan is that of the university discourse as the structure of alienation (cf. Fig. 3). 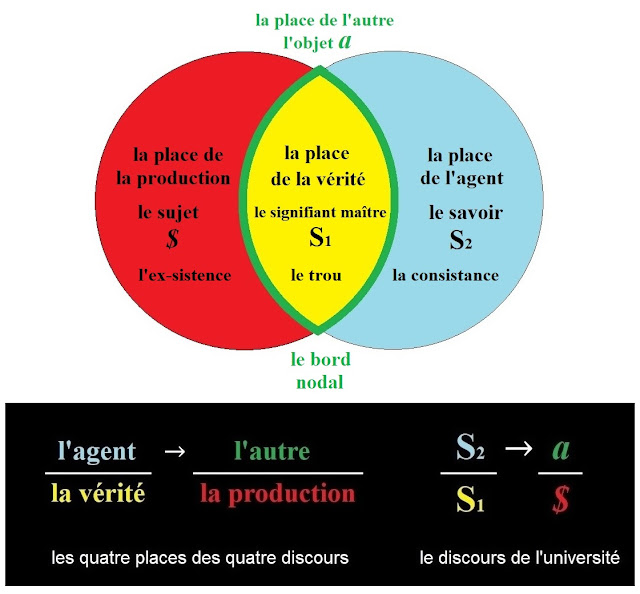 The letter which makes the edge (green) of the hole (yellow) which I call “apophatico-ontological hole” and which opens on the surface of Other’s locus (blue) is the object a which is something material supporting the structure of the university discourse.

When Lacan talks of “The Instance of Letter in Freudian Unconscious”, he talks of the letter as the object a in the university discourse.

The right side part of the structure of the university discourse a / $ is the structure of what Lacan calls “formations of the unconscious” (formations de l’inconscient), for example dream, fantasy, various kinds of lapsus, Witz (wit, joke) and symptom. Certainly that object a is a letter, but not a phonogram like a Latin alphabet letter, but an ideogram like a character of hieroglyph or sinogram, as Freud says at the beginning of the chapter VI of his Dream Interpretation : “dream content [ what is given manifestly as images or representations in our dreams ] is presented to us as a translation of dream thought [ what is supposed to be a latent meaning of dream ] into another way of expression (...). Dream content is given, so to say, in an image-script (Bilderschrift) each sign of which can be translated into the language of dream thought”.

The a is a letter, in other words, a signifier in its materiality or consistency. The a is made of firm materiality of signifiers belonging to Other’s locus which Lacan calls “treasury of signifier” (le trésor du signiant) and which is the locus of consistency. But the signifier (letter) a doesn’t signify a Seiendes (something that is there) like other signifiers belonging to Other’s locus. The a represents the subject $ which ex-sists in the locality of Being, and the a also gives a firm material support to the ex-sistent subject $ which can not ex-sist without such a support. That is what is formalised by the mathème : a / $

Instead of signifier and letter Lacan uses some other terms like symbol, sign, cipher. In all of those what matters is the materiality a signifier or a letter can offer to the apophatico-ontological structure. His neologism lalangue introduced in the Seminar XIX ...ou pire (1971-1972) also denotes such materiality of signifier.

It seems that, when we hear what is uttered, we understand immediately it in its meaning, but in fact it is not so, especially for psychoanalysts who abstain from understanding to keep open the possibility of interpretation. In the first place we hear fragments of lalangue in their materiality and in their equivocality or in their meaninglessness. Then we put them into letters (that is, interpret them) to notice that the way of transcription can be plural because they are equivocal or meaningless in themselves. Lacan gives us many examples of such fragments of lalangue : “a letter - a litter” of the Joycean circle, lettre - l’être, l’a-chose (la chose), y a d’l’Un (il y a de l’Un), a-mur (amour), les non-dupes errent (les Noms du Père), le sinthome (le saint homme, le symptôme), l’insu que sait de l’une-bévue s’aile à mourre (l’insuccès de l’Unbewußt c’est l’amour), etc.

So on the occasion of his second trip to Japan in 1971 Lacan, sorry for Japanese translators of his Ecrits who can understand nothing of what he says or writes because they are not interested in psychoanalysis per se, declares nevertheless in front of them : “all depends on this : with what kind of ear you can read the things [ i.e. letters as fragments of lalangue you listen to ]”.

Finally why interpret the letter (i.e. fragments of lalangue) which is situated in the structure of the university discourse as the object a representing the subject $ ? In order that the ununderstandable Bedeutung (significance) of the letter a ‒ i.e. the subject $ ‒ comes out from its place of hiddenness (Verborgenheit) into the place of unhiddenness (Unverborgenheit), because the purloined letter (la lettre en souffrance : $) desires to be delivered finally to the destination.

In Poe’s conte Dupin formulates the hidden message destined to the Minister D (who might be his brother because in the Greek myth Atreus and Thyestes are brothers to each other) quoting one and a half verses of Crébillon’s piece of tragedy, but Lacan modifies there a word subtly :

(Such a funest destiny,

if not Atreus, does become Thyestes.)

This letter, when unhidden, will be as fatal as Medusa’s head ( « la face médusante de ce signifiant » : Ecrits, p.40) for the Minister D because it is by the action of the death instinct (Todestrieb) that the purloined letter $ which is nothing but the death itself will finally arrive at its destination. Lacan calls this fatal moment “subjective destitution” (la destitution subjective). But we can recall also Heidegger’s term “Austrag” (to bring an antinomy to an Aufhebung). That destitution is also the rise (Resurrection) of the dead subject $ from the place of hiddenness to that of unhiddenness. This is what expected to happen at the end of psychoanalysis. We can schematise the process as follows (cf. Fig. 4) : 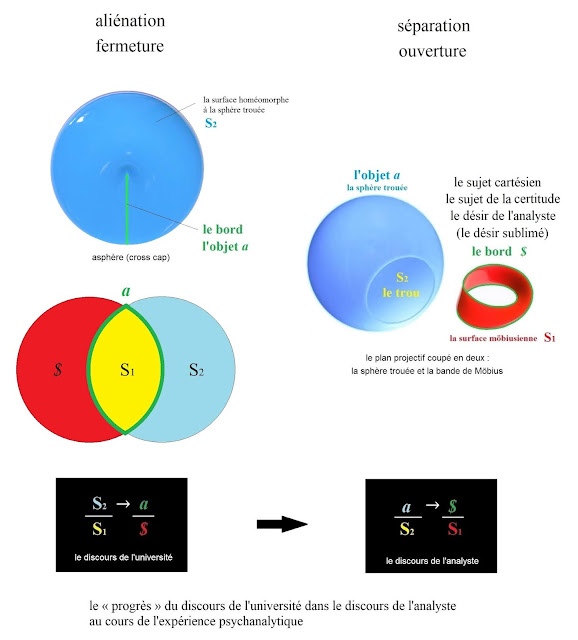 The Fig.4 represents the psychoanalytical process Lacan calls “progress” form the university discourse to the analyst discourse, where the subject $, hidden in the locality of ex-sistence (red) rises to the place of unhiddenness (green) to become the sublimated desire.

It is this sublimated desire that Lacan calls “analyst’s desire” : the condition of possibility of psychoanalysis.

This conclusion (Austrag) at the end of psychoanalysis corresponds also to what Heidegger calls Ereignis : the Being, fallen to be alienated in quotidianness, now separates itself from its alienating covering and opens itself out as Lichtung (clearing).

In other words the Ereignis consists in assuming the most proper possibility of being ‒ i.e. the death ‒ not in the form of suicide but in endurance of death anxiety. Heidegger might have thought that the war would provide das Volk with a decisive opportunity of such trial. Instead, for us, our own experience of psychoanalysis will make us capable of enduring that extreme anxiety of Being.