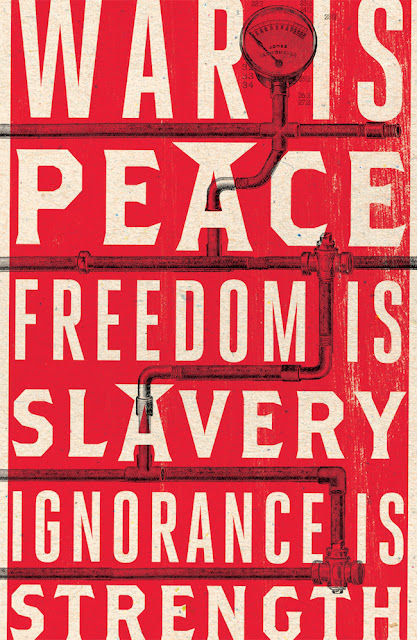 Recently one of my friends whose mother tongue is not Japanese but one of the Indo-European languages and who is interested in Lacan's teaching posed me the following questions :

I've reread your text on Japanese language. I must say that I agree with most of it. I wonder what your opinion is of Keigo [ respectful manner of speech in Japanese ] as functioning S1 and the proliferation of the imaginary within Japanese society as related to neurotic perversion — phallic enjoyment of the image.

Almost at the same time somebody in Facebook called my attention to a radio program of France Culture where they talk of Orwellian Newspeak in the context of post-truth politics under Donald Trump's government. I read Orwell long long ago and I didn't remember the Newspeak Orwell invented in his "1984".

Anyway, if you remember or reread "1984" you cannot help but notice the striking similarity between the present Japanese society where the post-truth politics are extremely prevailing and the freedom of speech is no longer respected under Shinzo Abe's government and the dystopian society of the fictional superstate Oceania where the totalitarian Party of Big Brother governs by means of the Thought Police and the Newspeak to the extent that it is impossible there to think freely.

The actual Japanese language is exactly a non-fictional example of the Orwellian Newspeak : if you dwells there (in Japanese or in Newspeak) you cannot say nor hear anything other than predetermined meaning which I called in my article about Japanese language "master significance" (la signifiance maîtresse, die Herrenbedeutung) and which is formalised with Lacanian mathème S1 (master signifier : le signifiant maître) in the place of truth in the discourse of university :

In the case of Orwellian Newspeak the dominance of master significance is conditioned by a process of purposeful destruction of language, as Syme, a "comrade" of the principal character Winston Smith in the "Ministry of Truth", explains to him :

Don't you see that the whole aim of Newspeak is to narrow the range of thought ? In the end we shall make thoughtcrime literally impossible, because there will be no words in which to express it. Every concept that can ever be needed, will be expressed by exactly one word, with its meaning rigidly defined and all its subsidiary meanings rubbed out and forgotten. Already, in the Eleventh Edition [ of the Newspeak Dictionary ], we're not far from that point. But the process will still be continuing long after you and I are dead. Every year fewer and fewer words, and the range of consciousness always a little smaller. Even now, of course, there's no reason or excuse for committing thoughtcrime. It's merely a question of self-discipline, reality-control. But in the end there won't be any need even for that. The Revolution will be complete when the language is perfect. Newspeak is Ingsoc [ English Socialism ] and Ingsoc is Newspeak.

In the case of Japanese the dominance of master significance is conditioned, as I explained in my article, by the linguistic fact that the actual Japanese language contains in it too many foreign elements (Chinese, English, etc.) to function properly as a language to the extent that a phrase stated in Japanese is meaningless without a predetermined master significance. That means in Orwellian terms this : in Japanese thoughtcrime is unnecessary and even impossible ; Japanese is the ideology of Nippon Kaigi (Japan Conference : an ultranationalist lobby with decisive influence on Shinzo Abe's government) and the ideology of Nippon Kaigi is Japanese. In other words : one cannot think in Japanese.

That is the very effect of predominance of master significance in Japanese.

Now, let us return to the questions a friend of mine posed to me : 1) the problem of Keigo [ respectful manner of speech ] in its relation to the predominance of master significance S1 in Japanese and 2) the problem of proliferation of imaginary elements in Japanese society and culture.

Keigo is a grammatically codified system of respectful manner of speech in Japanese. I think the necessity of Keigo is originally motivated by the avoidance of mentioning in a phrase its subject especially when it is a person of high social status. You can observe very sophisticated and complicated use of Keigo for example in the Tale of Genji written in the early 11th century, a long story whose scenes are situated mainly in and around the imperial court with a strict hierarchy of aristocratic society. When a phrase concerns a person of higher rank — the highest being of course the emperor —, the phrase omits often the subject word, and instead, Keigo expressions suggest who the absent subject is. And higher the social rank of the subject person in the phrase is, more complicated the expressions of Keigo are.

So what matters from our point of view in the Keigo system is the absence of the subject word in phrases. Who does so or who says so is often unclear in Japanese if you don't know it beforehand. In other word, in Japanese language and society, if you don't live in the discourse whose predetermined master significance is known to you already, verbal communications are practically impossible for you.

And that is also true in the Orwellian Newspeak, where the subject is often impersonal and the meaning of the phrase is always known to you already. What matters is nothing but the predetermined master significance.

What is called "truth" in post-truth societies like Japan and Orwellian Oceania is the master significance S1 in the place of truth in the discourse of university, which significance might be conditioned historically or could be posed there completely arbitrarily to manipulate public opinions or to dissimulate inconvenient pieces of truth. When the master significance is posed and fixed under some psychopathological conditions we will have paranoiac or paranoid delusions.

For the second question about the problem of proliferation of imaginary elements in Japanese society and culture we must begin by clarifying the Lacanian concepts of phallic jouissance Φ and of plus-de-jouir a. 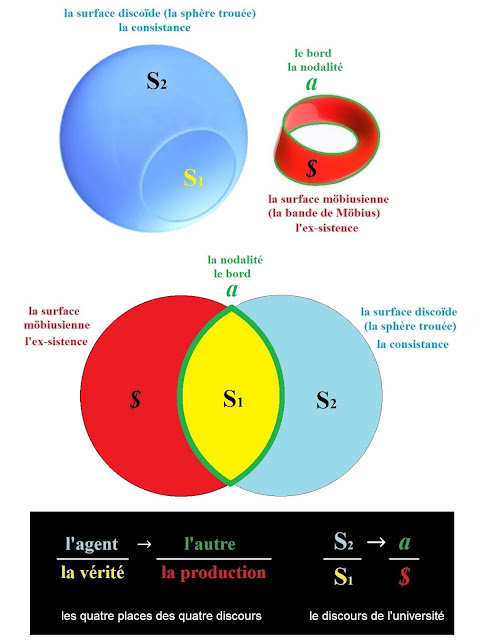 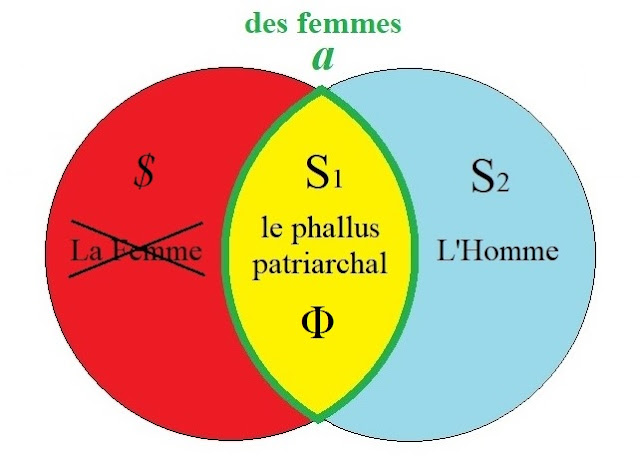 The structure of alienation (that of the discourse of university) has the fundamental and central hole which is impossible to obturate or to dissimulate and which we call "apophatico-ontological hole" (colored yellow). Relatively to the hole, we can define the master signifier S1 as what pretends to obturate it (but cannot really do so), and the object a as what tries to more or less dissimulate it (on the edge [ colored green ] of the hole).

The Freudian concept of libidinal development supposes the final stage of maturity which Freud calls "genital organisation". It is supposed that in the genital organisation the phallic jouissance is realisable by mediation of the patriarchal phallus Φ (the masculine ego-ideal) as a master signifier S1 obturating the hole. But in fact, there is no sexual relationship (il n'y a pas de rapport sexuel), that is the phallus capable of obturating the hole is impossible (it doesn't cease not to be written). The patriarchal phallus Φ is nothing but a fake or a semblance.

Thus, because the genital organisation is impossible, "the act of making love is polymorphous perversion of men", says Lacan (Séminaire XX Encore, p.68 dans la version du Seuil), that is a man can only have a plus-de-jouir a.

Now that everywhere in the world pornographic images are abounding in Internet, I don't think we can say that perverse proliferation of imaginary elements is specifically Japanese phenomena. Nonetheless, if we observe an abundance of imaginary elements in Japanese society and culture, it is related to the fundamental non-functionality of Japanese language and to its compensation by imaginary elements. More coercively the male ego-ideal Φ is imposed to men, more abundantly the perverse plus-de-jouir a proliferates. 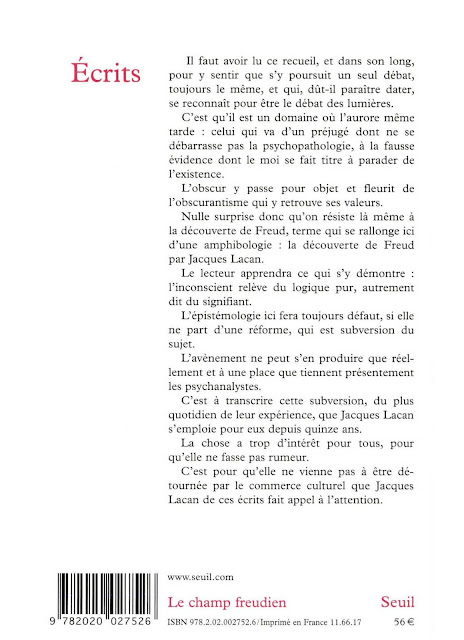